Does the post-COVID London office market hang on this capacity theory?

London’s post-COVID office market may not shrink by anything like as much as some fear – if new theories about peak capacity prove correct. David Thame reports. 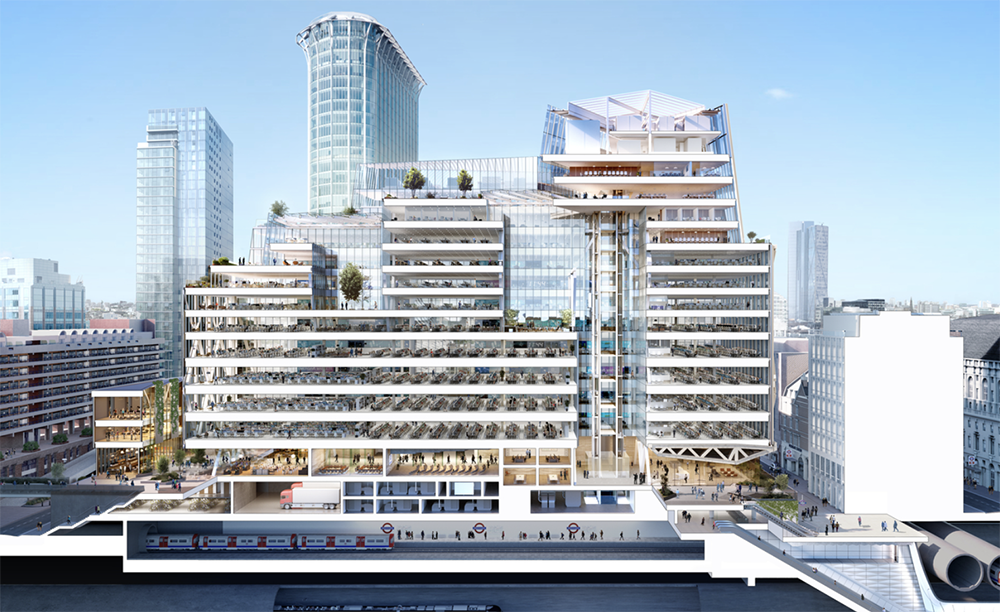 Morgan Stanley, the giant US investment bank, could have chosen this moment in summer 2021 to radically re-think its property needs. But apparently it hasn’t. The New York-based finance house is finalising plans for a new 650,000 sq ft London HQ. Both the City and Docklands are identified as potential locations.

Morgan Stanley is, admittedly, reducing its floorspace: down from around 800,000 sq ft in Canary Wharf. But a cut in their office requirement can’t take the shine off the fact that they are still looking to replace most of it at a time when some appear to have lost faith in offices full stop.

For now, the big deals that set the tone for London’s office market seem to be on track. COVID hasn’t sunk them. Google are still pursuing plans for 650,000 sq ft at Kings Cross. Deutsche Bank is still on course to move into a new 564,000 sq ft UK headquarters at 21 Moorfields, above Moorgate Station in the City, in 2023.

So far, so good. Investors are encouraged, particularly the overseas investors who do not see our local political and economic anxieties as very significant. Far Eastern investors are particularly relaxed, and see now as a great moment to sell to the large number of opportunistic buyers looking to snap up a piece of the London action. Chinese investor Fosun has put the 56,000 sq ft Docklands HQ of News International up for sale at £400m. The last time the six-building campus traded, it was for a little short of £300m in 2016. So nice payday for Fosun.

Trend-setters like Canadian firm Brookfield are going even further, hinting that now would be a good time to pile into the London office market ahead of growth in the next few years. Given Brookfield’s enormous power, the prediction is sure to be self-fulfilling.

Thanks to a £720 million deal, they are about to acquire two notable West London properties – Hammersmith Embankment and Uxbridge Business Park.­

So everything is dandy in the London office market? The answer depends on who you talk to. There is a lot of generalised anxiety about the extent to which the UK government, and multinational corporates, will insist on a return to work. Without this, there could be problems, which would reverberate back up the property food chain. For instance, The Economist speculated that a cut in office occupancy would reduce the value of office real estate, with implications for the insurers and pension funds that own them.

That is regarded as an unduly alarmist view by most; and as a misunderstanding by others. Instead, they hang their hopes for the London office market on what is called ‘peak capacity theory’ and it goes like this.

Justin Curlow, AXA Investment Management Alts’ Global Head of Research and Strategy, explains: ‘In a post-COVID world we expect office occupiers to focus on two key priorities: first will be peak and not average demand as it relates to their ultimate space needs. Akin to how transit infrastructure is planned.’

This is for the same reason the London Underground knows that, during the day, it will be operating half-empty trains, but plan their capacity based on peak needs, not on average needs. So big office occupiers will take offices knowing that, much of the time, they will not be fully occupied. They too will take office space for peak requirements, rather than the average attendance.

In other words, office occupiers expecting maybe one-third of their staff to be working away from the office at any given time cannot afford to reduce their office floorspace by one third. This is because they know there will be occasions when almost everybody is in the office (midweek, perhaps, or for big projects or events). So they have to plan for a headcount closer to their actual (peak) total rather than for the average (off-peak) total.

Deals like Morgan Stanley’s suggest a 20-25% reduction in floorspace. This is less than some feared, but maybe a little more than their eventual requirement, if Justin is right.

John Mulqueen is Head of Offices EMEA at CBRE Global Investors. He is also an adherent of the peak-loading theory. In fact, he takes it a stage further.

‘I think we need to be realistic about what working patterns were before the pandemic. In many London workplaces staff were in four days a week, not five, if you looked at meetings and visiting clients. So we hadn’t been looking at 100% occupancy all the time before COVID. If that goes down to three days a week, does that make a big difference?’ John asks.

‘Occupiers will have to consider peak-loading, which means planning for the highest not the average number of people in the office simultaneously, so they will not need materially less floorspace.’

John goes on to make, semi-seriously, an interesting point. ‘Consider that we already accept that expensive offices are empty for two days a week – a weekend – and maybe we will begin to think that they are less busy, less occupied, on Mondays and Fridays?’ he says.

Behind the peak-loading argument hovers another that says that two years of delayed deals and moves will suddenly burst into activity once the pandemic appears to be over.

Justin says that occupiers ‘have effectively stacked a couple of years of lease events on top of one another, which, when unleashed, will likely lead to a significant wave of take-up’.

Data from Colliers points the same way, with renewed demand prompting predictions of strong capital growth (in the value of office floorspace) in the second half of this year.

These are soothing thoughts for those letting vacant (newly completed) London floorspace. AXA Investment Managers – Real Assets has embarked on the letting campaign for the 1.2 million sq ft skyscraper at 22 Bishopsgate.

Head of Leasing, James Goldsmith, says they are pinning hopes on a broader amenity and flexible workspace offer to help uncertain occupiers learn what peak or average-loading might look like.

‘We are currently assessing plans to bring forward a flexible workspace and coworking offering,’ he says.

‘With the first occupiers expected to move in as the UK continues to emerge from lockdown and a number of new leisure offerings to be announced or open over the summer, we expect 2021 to be a hugely exciting year for 22 Bishopsgate, as the building transitions from being a development to a fully operational workplace and London destination.’ 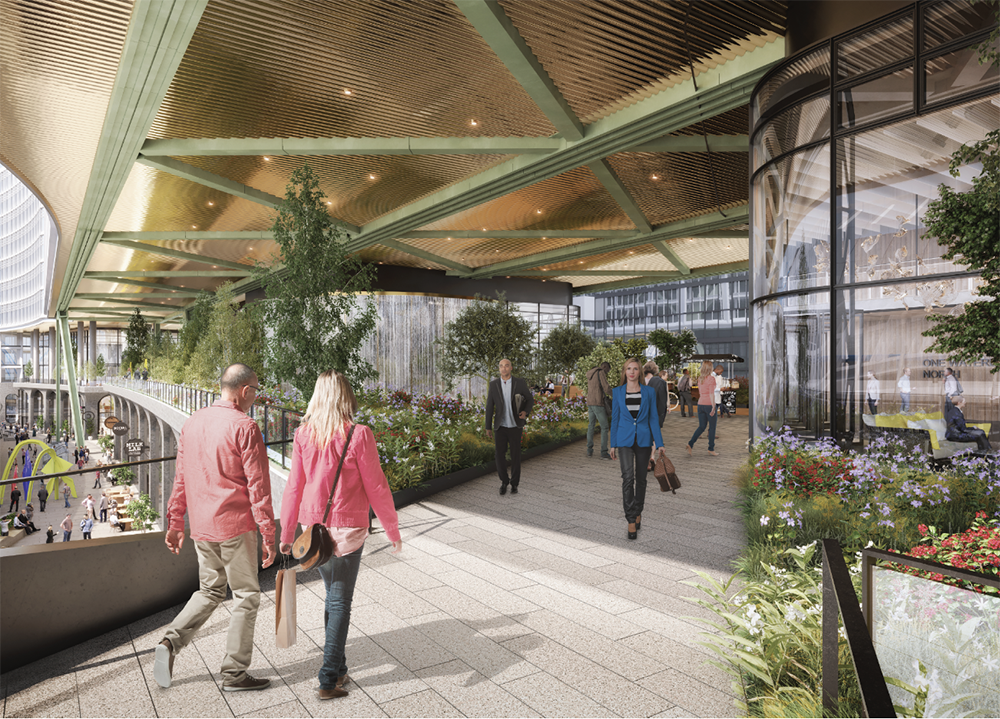 When work on site begins, One Waterloo will tap into the post-COVID market for buildings with a strong wellbeing profile. They promise a 16th floor ‘urban sky farm’ to produce ultra-fresh produce for the scheme’s occupiers.

For a rounded view, turn to Jonny Lee, the energetic West End agency partner at Knight Frank. ‘Yes, wellbeing is closer to the front of occupiers’ minds. Before COVID it was special, now it’s entry level. They all want a yoga studio, they want to know if you have a roof terrace, they want you to show them how the building is going to make them feel good on a dreary morning in November,’ he says.

‘But the idea that everybody wants less floorspace is an oversimplification. In the finance world it is exactly the opposite. There is a real fight for space in Mayfair and St James’ because the finance sector has done extraordinarily well during the pandemic. The same is true in the tech sector: look at Snapchat taking more space, Amazon growing its footprint too.

‘We were challenged at the start of the pandemic to re-think the office market on the assumption that requirements would be 10-15% down. But I think we are all realising that you need floorspace to enable hybrid working because all those Zoom-rooms are quite space hungry.’

This optimistic bulletin from the front-line suggests London’s office market is far – very far – from a crisis. The next few weeks will reveal how quickly it can resume the normal rate of growth.

Inspiration for your next read

Birmingham workspace: Road to nowhere turns into road to somewhere

The Birmingham workspace market is lifting itself up off the canvas as big relocations improve the mood. But there are still questions to answer, and growing demand for quality refurbished floorspace.

Patience will be needed when embarking on your future workplace strategy

As we navigate the last step of Boris Johnson’s road map out of lockdown, many businesses are once again re-examining their offices to decide whether they are fit for purpose in a post-pandemic world, says Colliers' Colin Wood.

What the billionaires want

Trillions of pounds of ‘family office’ wealth are surging into property. It means 2021 could be a Cinderella moment for some property sectors, as huge volumes of money moves the market. David Thame tells us what to expect.

Sign up here for our weekly newsletter, Mix Edit: curated highlights and news from the UK commercial interiors market.